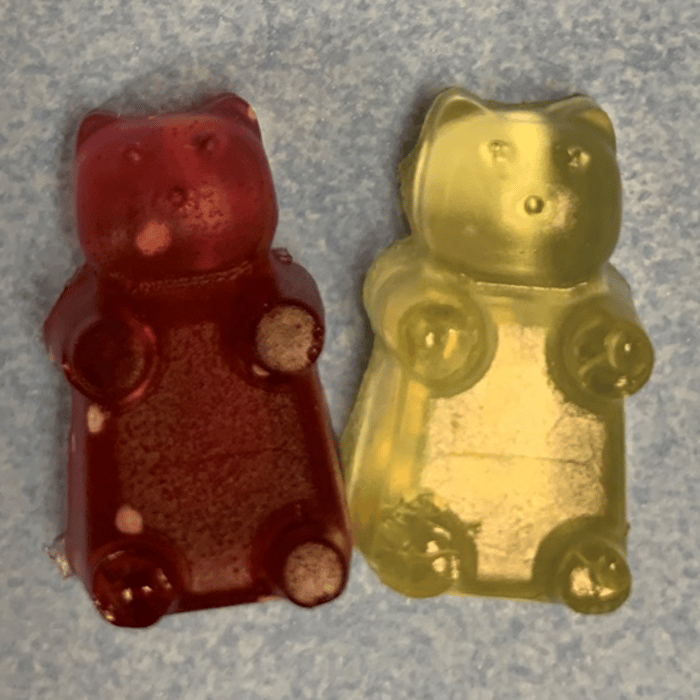 Wind Turbine Blades Could Be Recycled Into Gummy Bears

Everything has a downside, even renewable energy. Conventional wind turbines rely on massive blades and towers, which carry a hefty carbon footprint – though not when compared to fossil fuels. The carbon pollution produced during a wind turbine’s life cycle ranges from five to 26 grams of CO2-equivalent per kilowatt-hour. CO2-equivalent is simply a unit that includes carbon dioxide and other greenhouse gasses, like methane.

The carbon footprint of wind turbines is still significantly lower than fossil fuels. Plus, of course, renewable energy technologies don’t create more emissions once installed. The carbon footprint of natural gas-burning power plants is 437 to 758 grams of CO2-equivalent per kilowatt-hour. Coal-fired power plants are even worse, with estimates ranging from 675 to 1,689 grams of CO2 per kilowatt-hour. Clearly, wind turbines are the better answer.

The blades are typically made of fiberglass. Fiberglass is so challenging to recycle because it’s designed to be durable and withstand harsh weather for 20+ years. Basically, what makes this material so useful makes it difficult to transport, cut through, and repurpose it into other things.

But scientists from Michigan State University have a creative solution. They’ve created a new material for wind turbine blades that is more easily recycled than pure fiberglass. This material, dubbed a composite resin, combines glass fibers with both plant-derived and synthetic polymers.

“The beauty of our resin system is that at the end of its use cycle, we can dissolve it, and that releases it from whatever matrix it’s in so that it can be used over and over again in an infinite loop,” says John Dorgan, a chemical engineer from MSU, who presented the team’s work at the American Chemical Society. “That’s the goal of the circular economy,” he said in a press release.

Considering Halloween is coming up, a fitting fact about this composite resin is that it can be recycled into gummy bears. Yes, you read that right. Gummy bears! It can also be turned into countertops, car tail lights, and diapers. Talk about versatility.

Making something sweet out of wind turbines

The way it works is that the team found a way to separate their composite resin into its constituent parts. This means that the parts of the turbines that are most difficult to recycle, aka the glass fiber, can be taken out. The resulting goop can then be recast into new wind turbines and many other useful materials. \

Mix the resulting resin with different materials, and you can make countertops, laptop covers, and power tools. Raise the temperature during digestion, and you get a super-absorbent polymer that is used in diapers. Now, if you’ve got a sweet tooth, you’re in luck. Raising the temperature also produces potassium lactate, which can be purified into candy and sports drinks.

“We recovered food-grade potassium lactate and used it to make gummy bear candies, which I ate,” Dorgan said.

You may feel strange about eating something that was once a wind turbine blade. But listen to what Dorgan has to say about that. “A carbon atom derived from a plant, like corn or grass, is no different from a carbon atom that came from a fossil fuel,” he says. “It’s all part of the global carbon cycle.” The only real difference with these gummy bears is that you can feel good eating them, knowing they’re helping make wind turbines even more sustainable.

The researchers have only developed a prototype of their invention, so we’re still a ways off. Dorgan explains that there is a limitation in reaching a final product. He says, “There’s not enough of the bioplastic that we’re using to satisfy this market, so there needs to be considerable production volume brought online if we’re going to actually start making wind turbines out of these materials.”

Time will tell, but researchers may have found a handy way to recycle wind turbine blades! Just think, a few Halloweens from now, your kids may be eating gummy bears hailed from blades that once flew high in the sky.