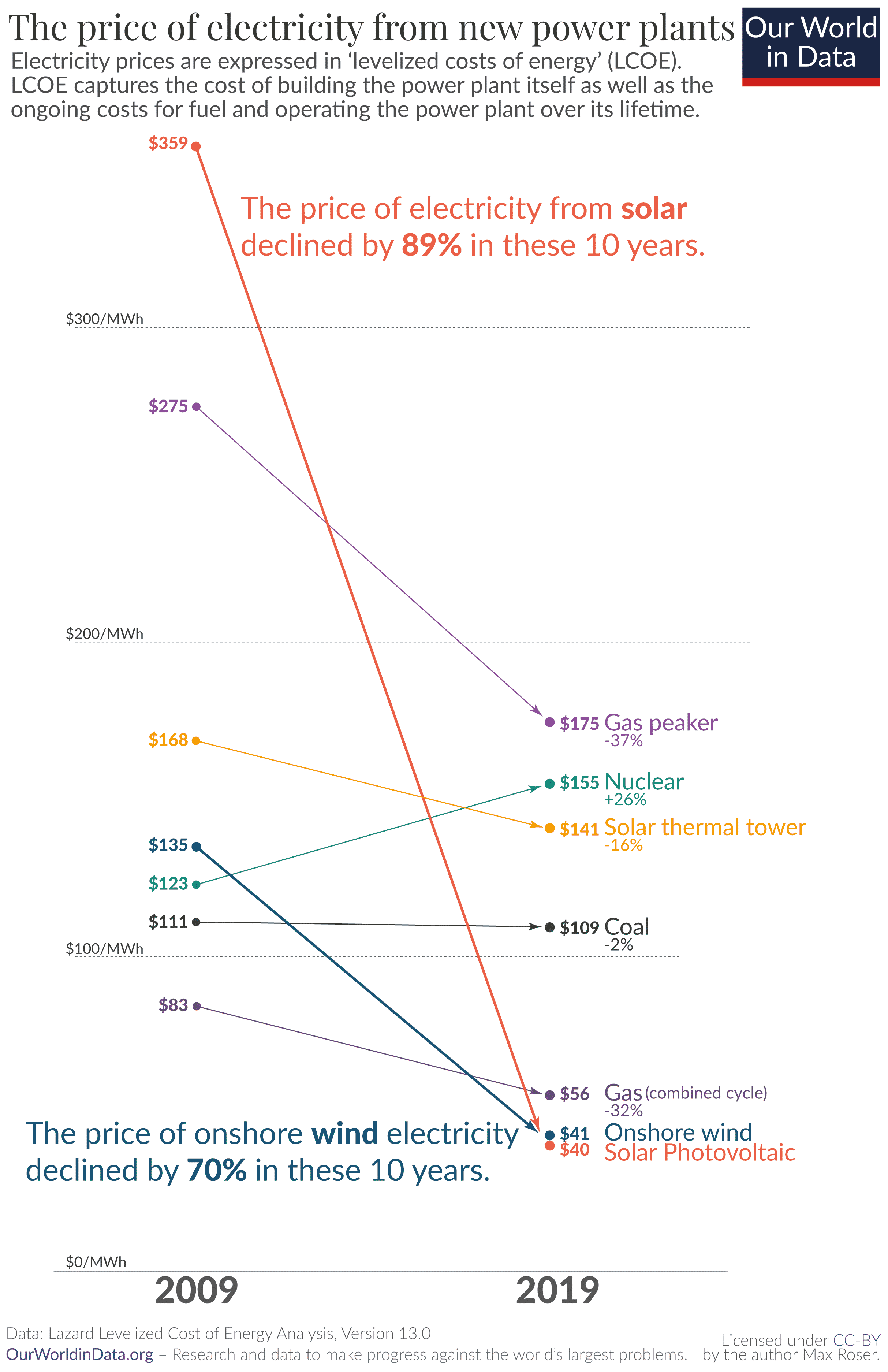 How did renewable energy become so inexpensive so fast?

Historically, fossil fuels dominated the global power supply because they were the cheapest energy source. This has changed dramatically in the past decade. Electricity from renewable energy is now less expensive than fossil fuels in most parts of the world.

Wright’s law and associated learning curves are the underlying drivers for renewables’ dramatic price decline. In short, as each piece of technology is produced, we learn how to make it better and cheaper. This, in turn, opens up new markets, thereby increasing demand. This virtuous cycle of positive feedback only further drives the price down. For example, solar today is 10X cheaper than a decade ago. So how did this happen?

Wright’s Law forecasts cost as a function of units produced. It specifically states that costs will fall by a constant percentage for every cumulative doubling of units produced. One can see this in the graph below, which illustrates the change in the price of fossil fuels and renewables in the last ten years.

The cost of fossil fuels and nuclear power depends largely on two factors – the price of the fuel that’s burned and the power plant’s operating costs. Renewable energy plants, on the other hand, are quite different. Operating costs are comparatively low, and they don’t have to pay for fuel, as the fuel comes from the sun and the air. Therefore, what determines the cost of renewable power is the cost of the technology itself and its ongoing maintenance.

Just ten years ago, solar and wind weren’t even remotely competitive to fossil fuels. Wind was 22% more expensive than coal and solar was 223% more expensive. Now, look at the change in the past few years. The price of solar has declined by 89% and the price for onshore wind by 70% since 2009. Electricity from a new coal plant now costs almost 3X more than electricity from a wind or solar plant.

The learning curve and an example of solar photovoltaic modules

The price of the technology drives the cost of renewable electricity; a quick look at the history of solar illustrates this point perfectly.

In 1956, the cost of one watt of solar photovoltaic capacity was $1,865 (adjusted for inflation and put in 2019 prices). One watt isn’t a lot. The typical American home uses about 29 kW of electricity daily. And yet, solar has continued to become the world’s cheapest source of electricity today.

First, even with astronomical costs, it did find a use. The first practical use of solar power was to supply electricity for the Vanguard I satellite in 1958. This high-tech niche use was valuable enough that people were willing to pay an incredibly high price for it.

Second, the price of solar modules declined as more of them were produced. Increasing production allowed us to improve the production process. Decreasing prices then made solar competitive in new markets, which further drove demand, starting a cycle of increased demand and falling prices. 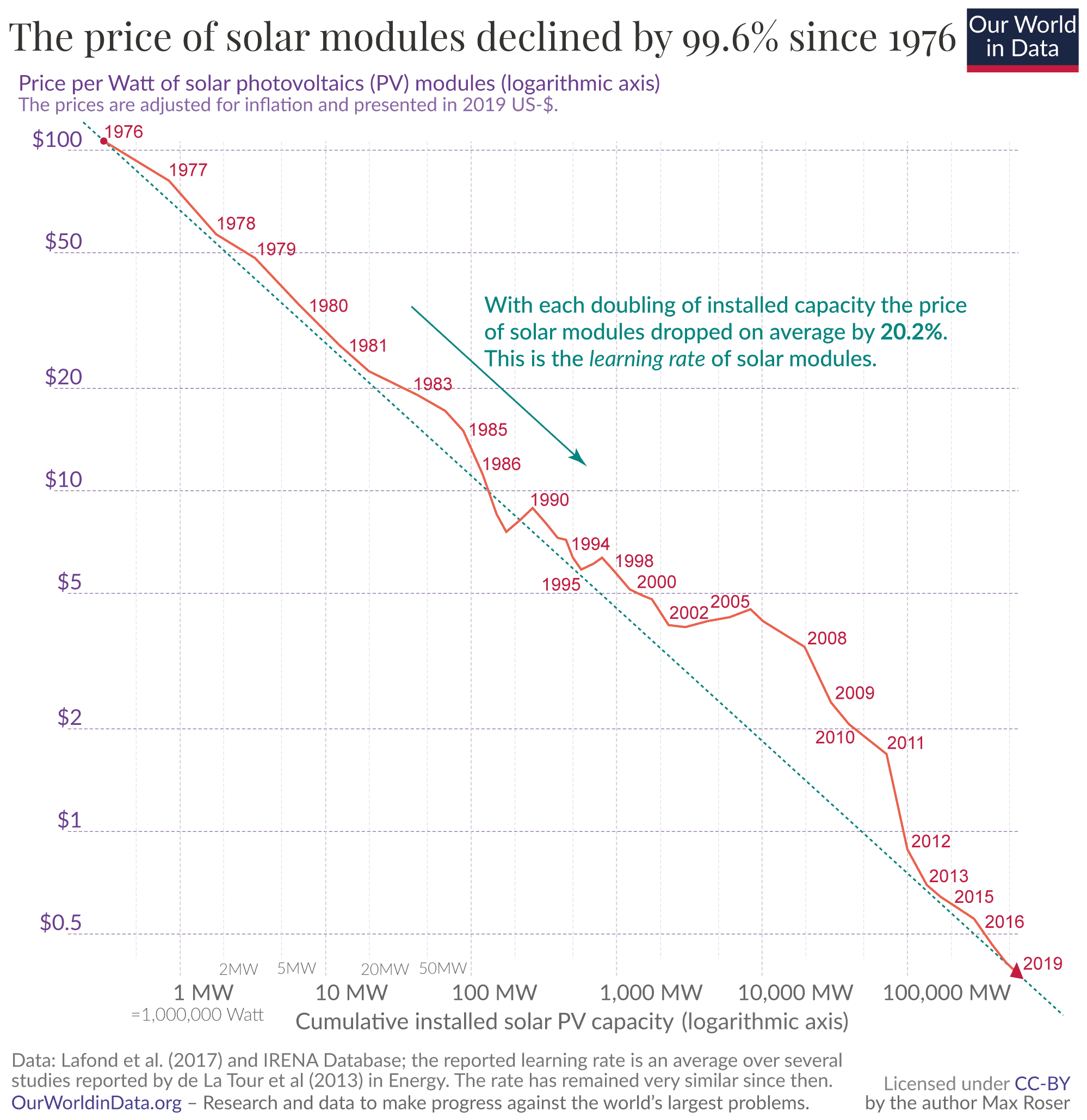 The price of renewable electricity also follows a learning curve

As you can see in the graph below, the price of electricity from solar also follows a learning curve that is just as impressive. 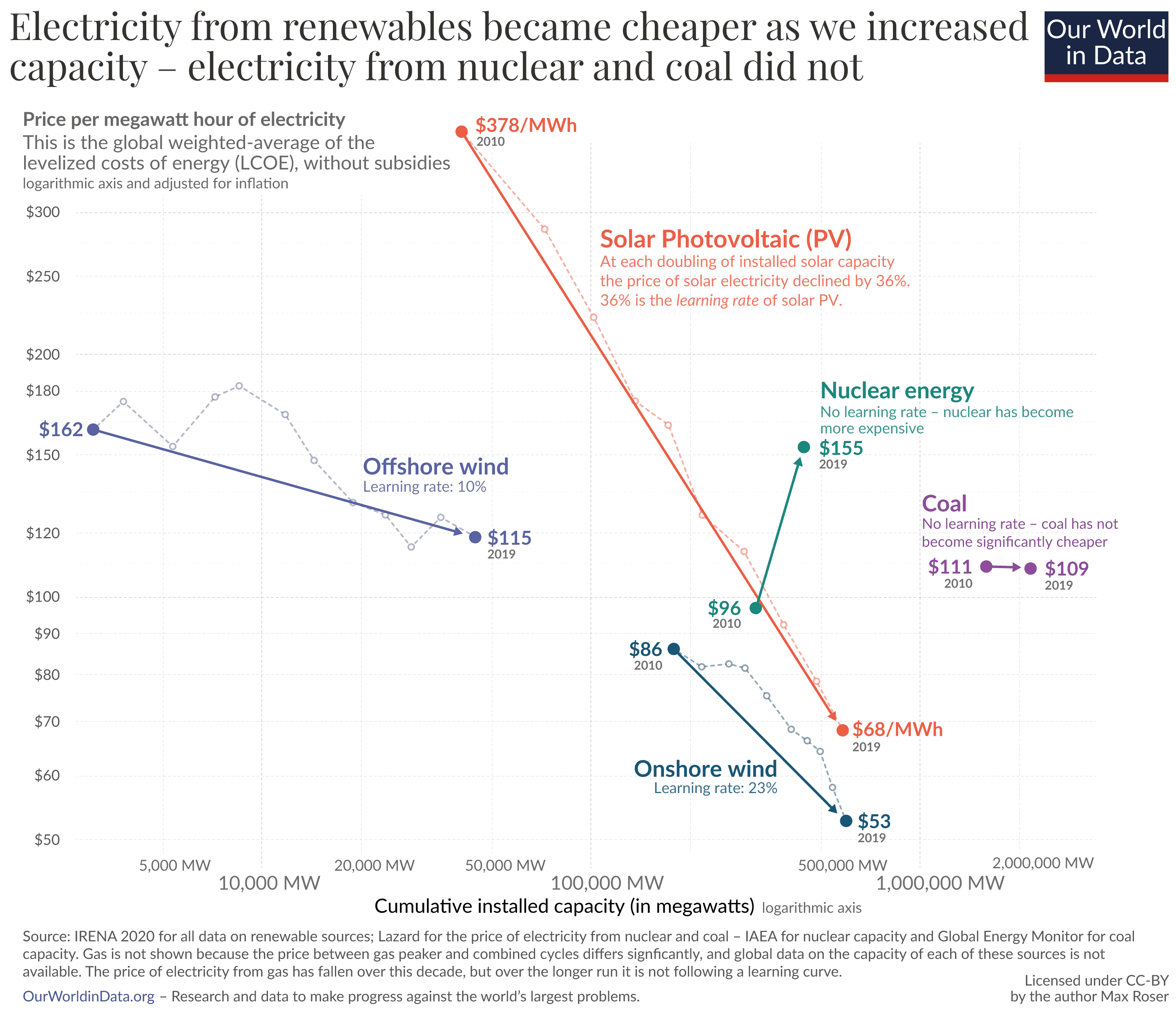 On the other hand, fossil fuels do not follow the same learning curve. Coal, for example, has stayed stagnant over the years. Its electricity can’t become much cheaper for two main reasons. First, the highest efficiency of coal power plants has likely been reached. Second, the price of electricity from fossil fuels depends largely on the fuel itself. For example, the cost of coal burned in a power plant accounts for 40% of total costs. This means that the price of electricity from fossil fuels has a variable baseline that is dependent on their fuel supply chain.

Windlift Airborne Power Generator (APG) will also follow a similar learning curve. Our solution is currently designed for niche markets, where hyper-portability and rapid deployment are crucial. As we deploy more systems, this will reduce the cost of our solution and assist in reducing costs for other wind energy solutions. Wind, deployed at scale, has the potential to be the lowest-cost energy source available.